After three bodies surface in the Hudson River over a period of three weeks, Oriscoe and Nogan catch the case. Nothing seems to connect the three men until the detectives discover they all used Sinder, the online dating app. Their digital footprints reveal a common thread – a penchant for supernatural women. The catch is, Lucifer owns Sinder. It runs on a proprietary mix of devilry and technology, and the Dark Lord wants to keep his secrets, even if it is his favorite niece asking. But there’s a seal-bridezilla swiping her suitors right…into the Hudson. When Dru and the devil lock horns, will it fall to Leery to run down her Silkie Stalkings?

The Dead Set defines high society in the Locus of New York. Lavish soirees, formal dinner parties, decadent blood tastings, debutante balls, black-tie charity galas…the vampires do it all. When socialite J. Gatsby goes missing, only one detective has the background, the breeding, and the poise to go undercover to root out the truth. Of course, Leery brings Dru along for good measure. And it’s good he did, because when the blood lords grow suspicious of a werewolf’s scent on the wind, Dru must use all of her charm to distract those suckers. Can the two detectives avoid discovery long enough to learn why They Ate Gatsby?

In the NYPD’s Supernatural Inquisitors Squad, a Warder has no higher calling than to protect her Claw. She uses magic, guile, physical weapon – anything required – and her razor-sharp focus never blurs. Drusilla Nogan exemplifies this grand tradition…except when there’s a cute gnome to talk to. With a notorious gnome gang on the loose, committing crimes all over Manhattan, Leery plays bad cop. The gnomes respond with raw, unfettered violence. Will Dru notice before Leery gets Gnome Schooled? 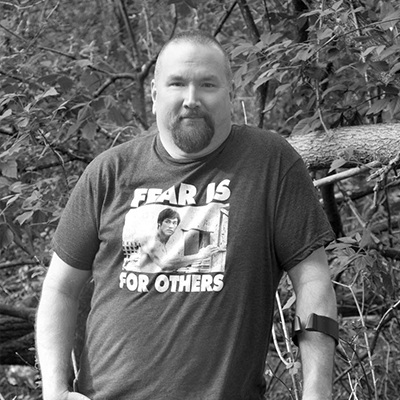 Erik Henry Vick is an author of dark speculative fiction who writes despite a disability caused by his Personal Monster™ (also known as an autoimmune disease.) He writes to hang on to the few remaining shreds of his sanity. He lives in Western New York with his wife, Supergirl; their son; a Rottweiler named after a god of thunder; and two extremely psychotic cats. He fights his Personal Monster™ daily with humor, pain medicine, and funny T-shirts.