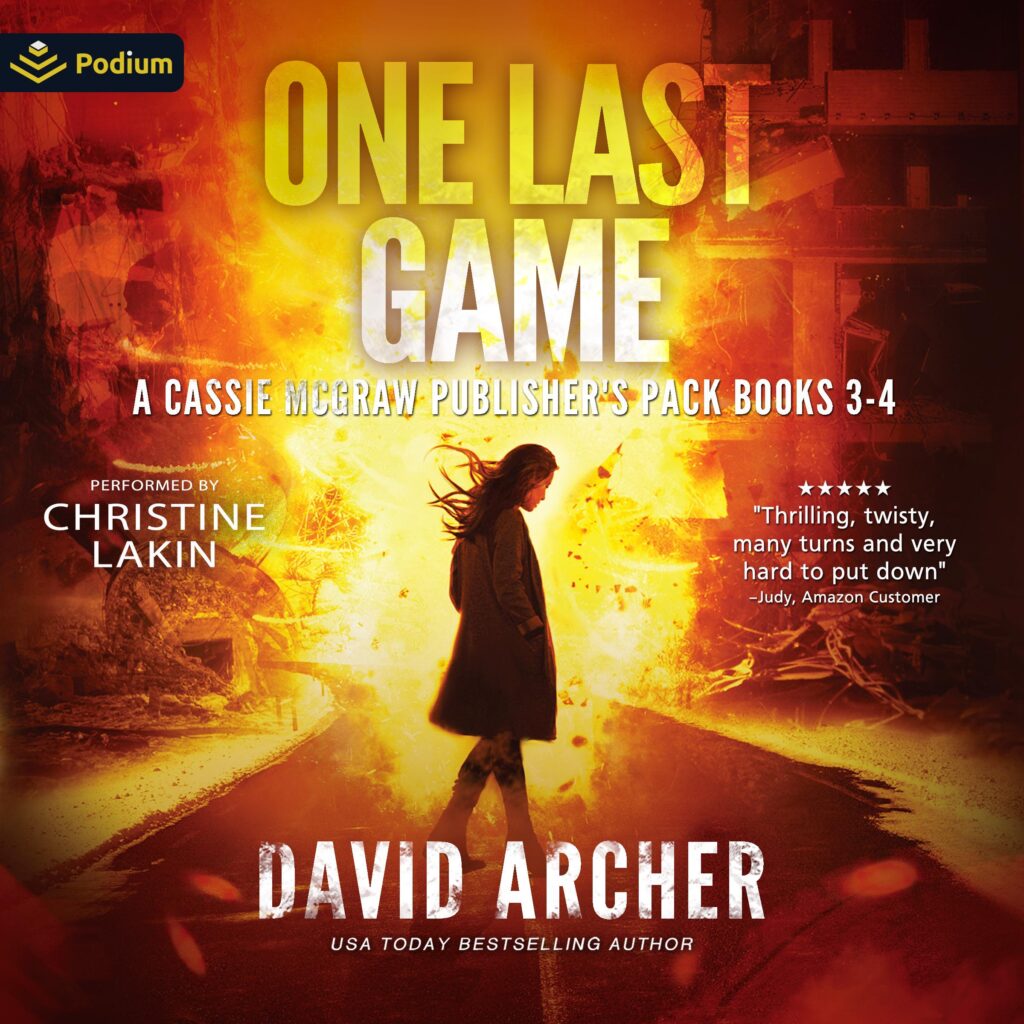 Contains the next two books in the thrilling Cassie McGraw series.
One Last Game, book three:
Cassie’s life has been going pretty well lately, especially since she and Dex decided to move in together. All that changes suddenly, however, when she finds herself running late for work at the Outreach Center and arises just in time to see the building blown up. Thinking that her friends are all dead, Cassie is devastated, but then she learns that the bomber was actually aiming for her.
Working with a new police detective, Cassie is determined to catch the madman behind the bomb, but he isn’t finished. Everything he does is designed to bring Cassie as much pain as possible, even to the point of targeting the shelters where families are housed. When he begins taunting her directly, Cassie becomes even more determined to bring his reign of terror to an end.
And then she learns the horrifying truth. The reason the bomber is out to destroy her life is because he blames her for destroying his own – and the only way he will stop, he claims, is if Cassie can find him and stop him. It’s a horrifying game of cat and mouse, and Cassie isn’t sure which part she’s supposed to be playing.
Never Really Gone, book four:
Cassie McGraw is back and just as tough as ever. When she’s approached by a woman whose husband and children had been declared dead more than a year earlier, after a terrible fire that took all of their lives, and asked to find proof that they were actually alive, she was stunned. When the only reason the woman could give for believing that they were alive was the fact that she had been having prophetic dreams all her life and had dreamed of the children repeatedly, Cassie was actually intrigued. When it turned out that the reason the grieving mother had come to Cassie was because she had once dreamed about her on the exact date when Cassie had suffered her terrible injuries, she was blown away.
Doubting that there was really any hope she could find anything to ease the woman’s grief, Cassie began working the case, but then she found evidence that the children and their father actually might be alive. Their father had apparently come up with an elaborate plan to make it appear they were dead in some warped attempt to have the children all to himself. This was a case that would take Cassie to places she had never been and put everything she loves at risk, but the potential for some sort of a happy ending was too great to pass up.

David Archer is the USA Today and #1 Amazon bestselling author of the Sam Prichard, Noah Wolf, and Cassie McGraw series. David was born and raised in Bakersfield California, and currently resides in the North West. His passion for writing was developed from a very young age, and nothing makes him happier than sharing his adventures with anyone who cares to tag along.