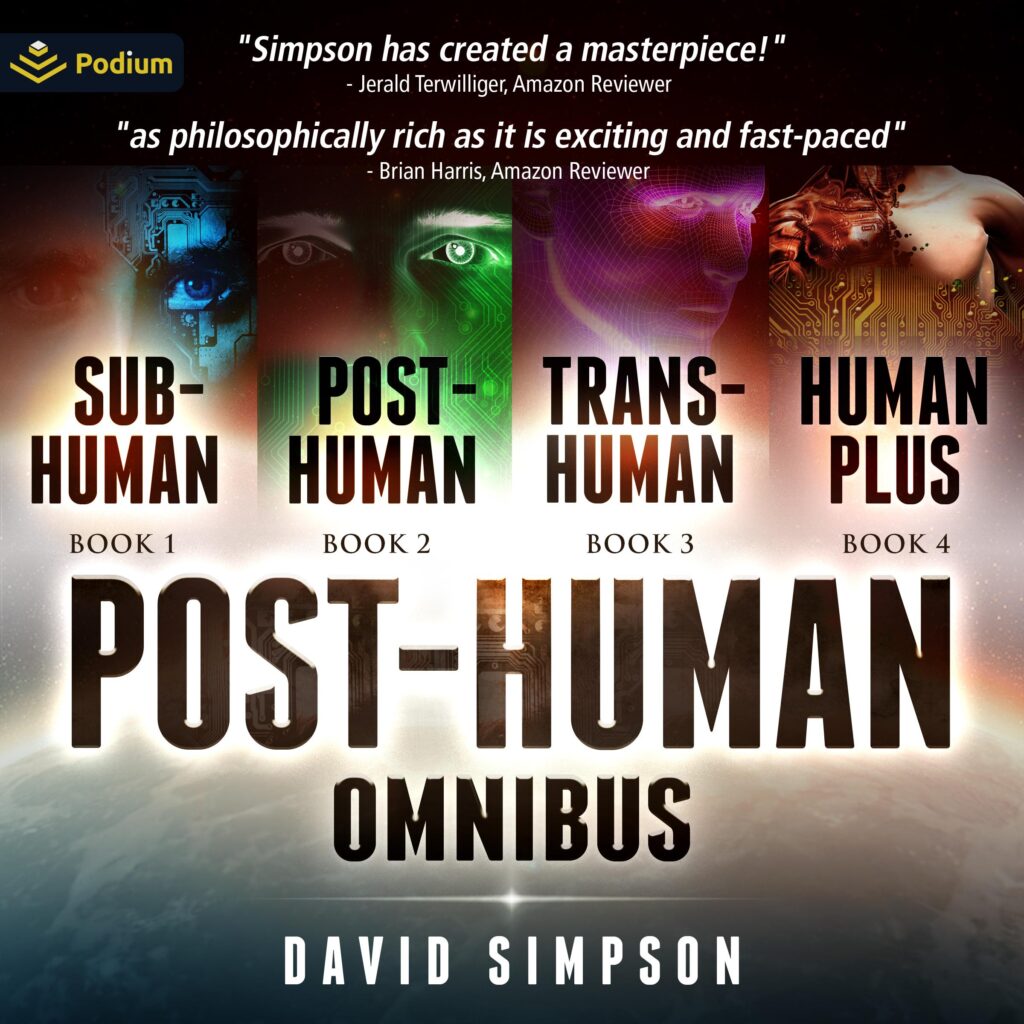 Contains books 1-4 of the Post-Human series.
1. Sub-Human
Before he was Oldtimer, he was Craig Emilson, a young doctor sucked into military service at the outbreak of World War III. Enlisting to become a Special Forces suborbital paratrooper, Craig is selected to take part in the most important mission in American military history – a sortie into enemy territory to eliminate the world’s first strong artificial intelligence. The mission is only the beginning of Craig’s story and the story of humanity as well as they accelerate toward a world that is post-human.
If you’re already a fan of the smash-hit Post-Human Series, this prequel to Post-Human, Sub-Human, will answer the previously unanswered questions of how the post-human world came to be. And if you’re new to the series, Sub-Human will serve as an engrossing introduction to a possible future that has enraptured tens of thousands of listeners!
2. Post-Human
The future should have been perfect. Microscopic robots known as nans could repair any damage to your body, keep you young by resetting your cellular clocks, and allow you to download upgrades like intelligence, muscle strength, and eyesight. You were supposed to be able to have anything you wanted with a simple thought, to be able to live forever. But when a small group of five terraformers working on Venus return to Earth, they discover that every other human in the solar system has been gruesomely murdered. Now James Keats and his four companions must discover what happened to the rest of humanity and fight back if they wish to avoid the same horrifying fate.
3. Trans-Human
In this sequel to Post-Human, humanity will be forced to face a future more advanced than it could have imagined if it wants to survive. Nineteen months have passed since the AI turned against humanity and was subsequently destroyed. In the meantime James Keats has turned over the AI’s powers to a nonintelligent, easily controlled operating system.
He and Thel have left the planet and spent six months vacationing on Venus, which has been terraformed without the consent or knowledge of the Governing Council. The AI has been deleted, but the message it sent out into the abyss of space in search of a companion has been answered. An alien force dwarfing the Earth is on its way to find out why the AI has stopped communicating. Keats and company can only assume its intentions will be hostile when it finds out the truth.
4. Human Plus
Human Plus is the fourth story in the smash hit science-fiction series. Not exactly a sequel, not exactly a prequel, Human Plus will defy expectations. No matter what you thought was coming next, you’re in for a surprise!
Just one caution: When you’re finished you’re going to want to share the surprises with everyone online…. Please don’t! Please respect future listeners, and let them enjoy the surprises just as much as you did!

He is the writer/director of Dangerous to Know, Bestselling and Award-Winning Author of the Post-Human series, Film Composer, Actor, TEDx Speaker, Technologist and Futurist.