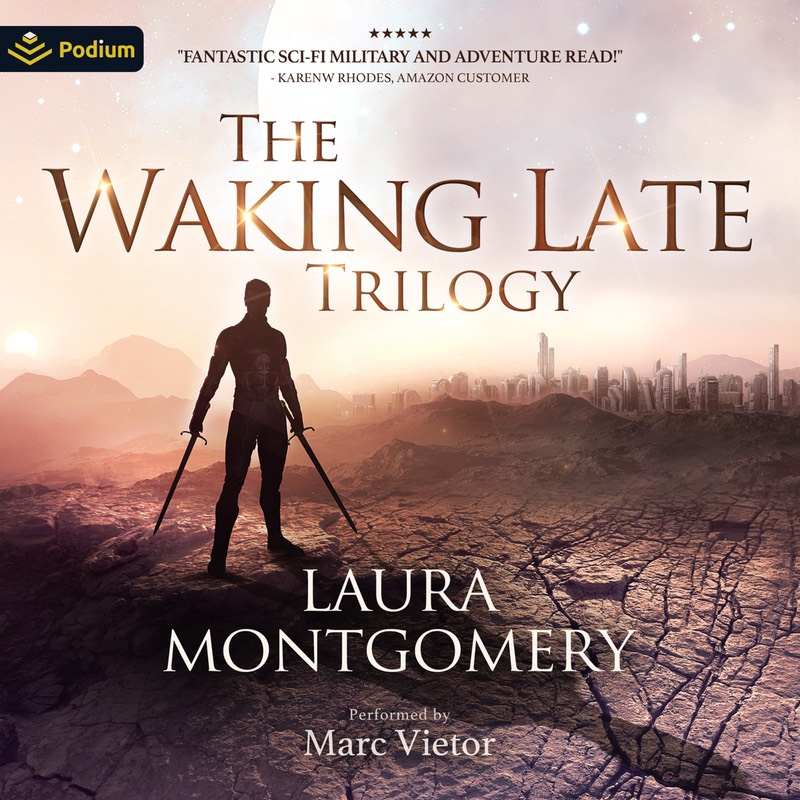 Contains all three books in the Waking Late trilogy.

Gilead Tan and Andrea Fielding survived their stint in the military, got married, signed up to emigrate to a terraformed colony world, and went into cold sleep for the journey from Earth. While they slept, the starship went through the wrong fold in space and settled for a different world, a wild world.

Three centuries after the founding of a colony on the uncharted planet, Gilead awakens to find humanity slipped back to medieval tech and a feudal structure.

Out of the Dell (book two)

On the planet Nwwwlf, in the lost colony of First Landing, the original settlers carved out one sylvan valley, a lone outpost where humans flourish. But their bright hopes and best intentions devolved over centuries into a rude replica of medieval feudalism.

Gilead Tan, who had been held captive for centuries in his sleeping cell, survived treachery and pain to free a small group of sleepers. But he and his friends now face the perils of life outside First Landing’s sanctuary – without their powered armor, their tools and technology, or anything else they need save for a few chickens.

Gilead must establish a safehold for his crew, but the alien environment does not welcome them, and petty bickering threatens their meager resources. He hopes that a trace of smoke – spotted above a distant ridge – beckons them to a better place.

The starship Valerie Hall failed to reach the terraformed world of its original destination. Instead, it found a habitable substitute where the settlers split into two factions. First Landing devolved into a rude replica of medieval despotism. Seccon might promise more.

Or so hope Gilead Tan and his companions.

Gilead spent three centuries in cold sleep, held there by a First Landing custom that decreed only one sleeper could be awakened every 50 years. Once awake, Gilead freed two dozen of his fellows – all soldiers like himself – and led them into the wilderness.

Close to 200 civilians still lie trapped in the decaying cryo-cells of First Landing. Their captive slumber haunts him.

But despite its vaunted freedom, Seccon has one rule. No one goes back to First Landing.