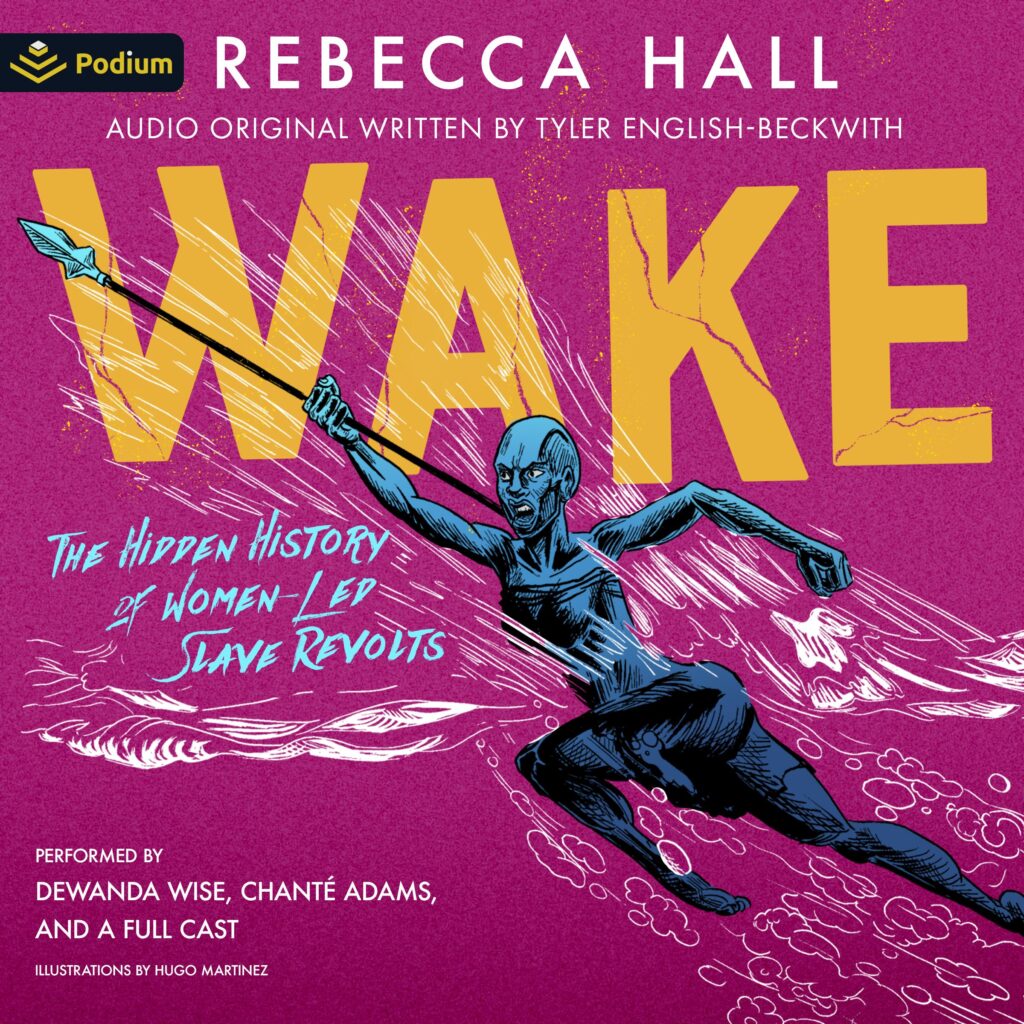 Selected as a best book of 2021 by NPR, The Washington Post, Forbes, and Ms. Magazine, Wake is an imaginative tour-de-force that tells the powerful story of women-led slave revolts, and chronicles scholar Rebecca Hall’s efforts to uncover the truth about these women warriors who, until now, have been left out of the historical record. Originally published as part graphic novel and part memoir, Wake has now been adapted into a dramatized audio original by critically acclaimed playwright and television writer Tyler English-Beckwith and features the voice talents of DeWanda Wise (Spike Lee’s She’s Gotta Have It, Jurassic World: Dominion, The Harder They Fall), Chanté Adams, (A League of Their Own, Roxanne Roxanne, A Journal for Jordan) and an all-star full cast.
Women warriors planned and led slave revolts on slave ships during the Middle Passage. They fought their enslavers throughout the Americas, and then they were erased from history. _Wake _tells the story of Dr. Rebecca Hall, a historian, granddaughter of slaves, and a woman haunted by the legacy of slavery. The accepted history of slave revolts has always said that enslaved women were not involved, but Rebecca decides to look deeper. Her journey takes her through old court records, slave ship captains’ logs, crumbling correspondence, and even the forensic evidence from the bones of enslaved women from the “negro burying ground” uncovered in Manhattan. She finds women warriors everywhere.
The ‘story behind the story,’ this audio play delves into Dr. Hall’s stint as both a law school professor then a high school teacher: poignant classroom scenes give voice to young minds grappling with the complexities of history, living in the wake of the trauma of slavery, and awakening to a new appreciation for the power of resistence. Historical vignettes from the graphic novel are deftly interwoven and underpin the entire narrative, transporting the listener from past to present through music and sound thematics by Jace Clayton (a.k.a. DJ /rupture).
Full cast includes DeWanda Wise, Chanté Adams, Jerrie Johnson, Fọlákẹ́ Olówófôyekù, Bahni Turpin, Rhian Rees, Karen Malina White, Román Zaragoza, Alex Ubokudom, John Stewart, Blake Cooper Griffin, and Tim DeKay.
2022 PEN Open Book Award Finalist
2022 NAACP Image Award for Outstanding Literary Work – Debut Author Finalist
June 2021 reading selection for Steph Curry’s “Literati Book Club: Underrated”