Andrea is a pioneer in the Discord live-reading community and considered the queen of the litRPG and Gamelit genre, including a win in the 2020 IAA Awards for Gamelit. Get to know more about the voice behind The Wandering Inn series, Andrea Parsneau. 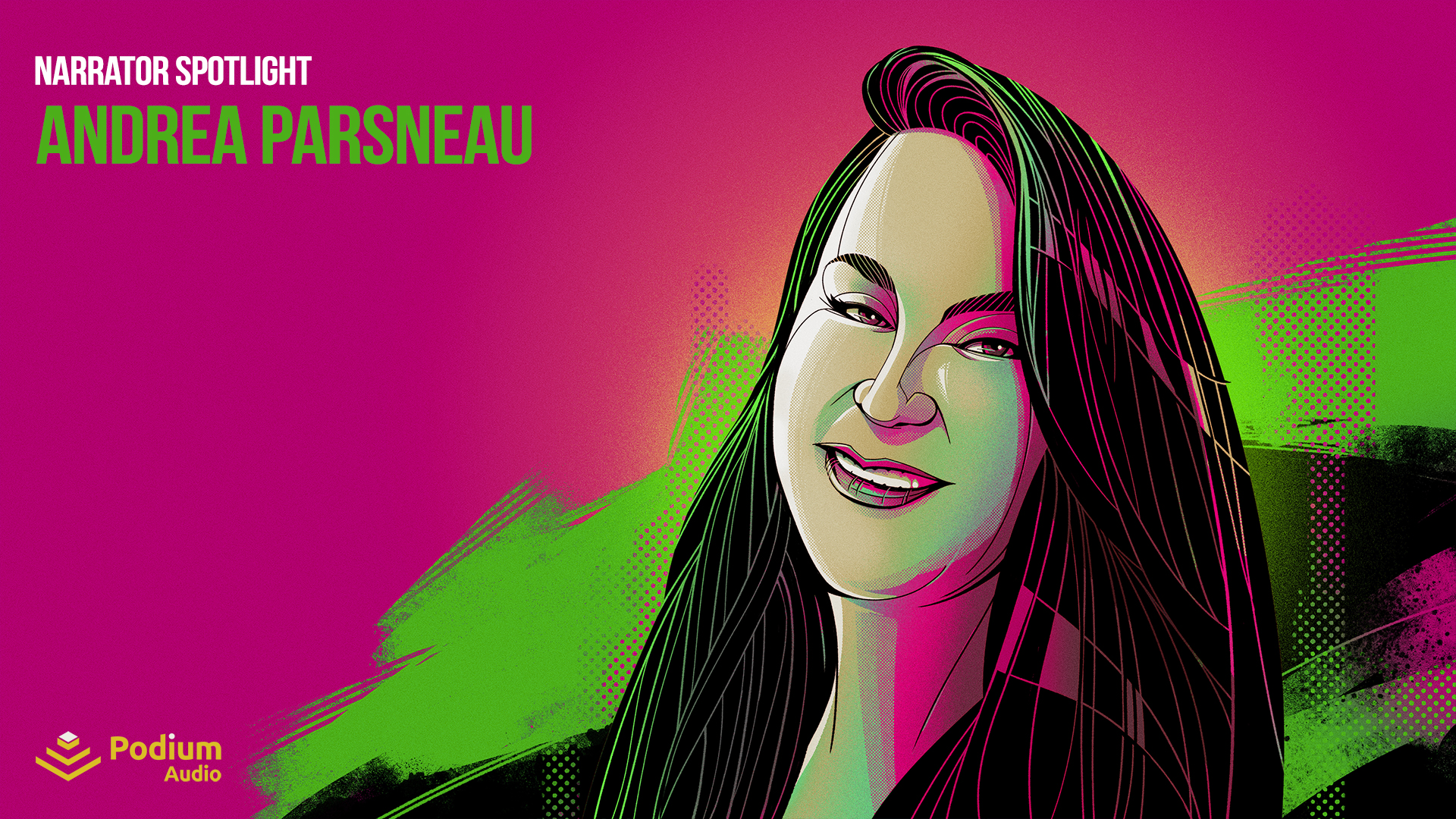 Narrator, voice actor, and all-around character only begin to describe the force of nature that is Andrea Parsneau. If a diverse cast of characters capable of emotional depth and comedic delivery is what you are looking for in your audiobooks, you must begin listening to Andrea Parsneau. See all her Podium Audio titles here and learn more about other projects she is working on at her website andreaparsneau.com.

We sat down with Andrea to ask the important questions, like “Is cereal soup?”

Q. Is cereal soup? Why or why not?
Cereal is to soup what a hotdog is to a sandwich. The former each have elements in common with the latter but will invoke the ire of the internet (and common decency) if you try to use them interchangeably.

Q. What secret conspiracy would you like to start?
Already working on this one with my stream! Ryan Reynolds is the Godfather of creative multi-word cursing and is actually dead but no one knows it, so we pay tribute to him every Saturday on our podcast. Our goal is that Ryan Reynolds hears about it one day and appreciates all the cussing we have done in his honor. This one’s for you Ryan.

Q. What’s the best Wi-Fi name you’ve seen?
I had a neighbor that named their’s “wi-fight it” and had it un-secured. I thought that was hilarious!

Q. What part of a kid’s movie completely scarred you?
Milo and Otis haunts me to this day. I still remember the soul-crushing feeling of watching Milo float away in the box with Otis desperately chasing him on the bank. I sobbed! Then, when Otis finally found Milo, they “talked” for a couple minutes, realized they had grown apart, and just left! What kind of resolution is that!?!

Q. In one sentence, how would you sum up the internet?
The greatest thing to ever bring about the downfall of society as we know it, while also being incredibly convenient for plus size shopping.

Q. What’s the weirdest thing a guest has done at your house?
I was about 17 and my mom had a friend of hers over from out of town. We visited for a bit, then she went in the guest room and stayed there for a few hours until my mom checked on her to tell her dinner was ready. Mom knocked on the door, heard a friendly “come on in!” and opened the door to find a fully nude woman sitting on the bed reading. She proceeded to carry on a whole conversation with my – very confused – mother as if nothing was out of the ordinary and then just went back to reading! Still the strangest experience with a guest, to this day. Live and let live, absolutely, but maybe don’t put your naked butt on your friend’s comforters unless you talk about it first?

Q. What mythical creature would improve the world most if it existed?
Pegasi. They would be a phenomenal method of energy-efficient air travel!

Q. What movie would be greatly improved if it was made into a musical?
Big Trouble in Little China! I love that movie as is, but can you imagine a vicious power ballad duet sung by Lo Pan and Jack Burton?! I need that.

Q. What is something that is really popular now, but in 5 years everyone will look back on and be embarrassed by?
I say the word “yeet” entirely too much. You can’t make me stop, but I know I will look back on that in a few years and hate myself just a little bit for it. I don’t think I am alone.

Q. Would You Rather Be In A Real-Life Version Of The Walking Dead Or A Real-Life Version Of Game Of Thrones?
Walking dead. Hands down. At the end of the day, I know that’s a zombie, I don’t feel bad killing that zombie. That zombie wants to eat me. I cannot even begin to understand the level of political maneuvering required to survive a real-life version of Game of Thrones. *shudders*

Q. If You Had A Theme Song, What Would It Be?
Baby Elephant Walk by Henry Mancini, but the remixed version that someone slammed together with Flight of the Bumblebee.