Fresh off being selected as one of AudioFile’s Golden Voices in 2020, the truly talented JD Jackson continues to wow listeners with his narrating skills. Learn more about the voice acting pro in this month’s Narrator Spotlight. 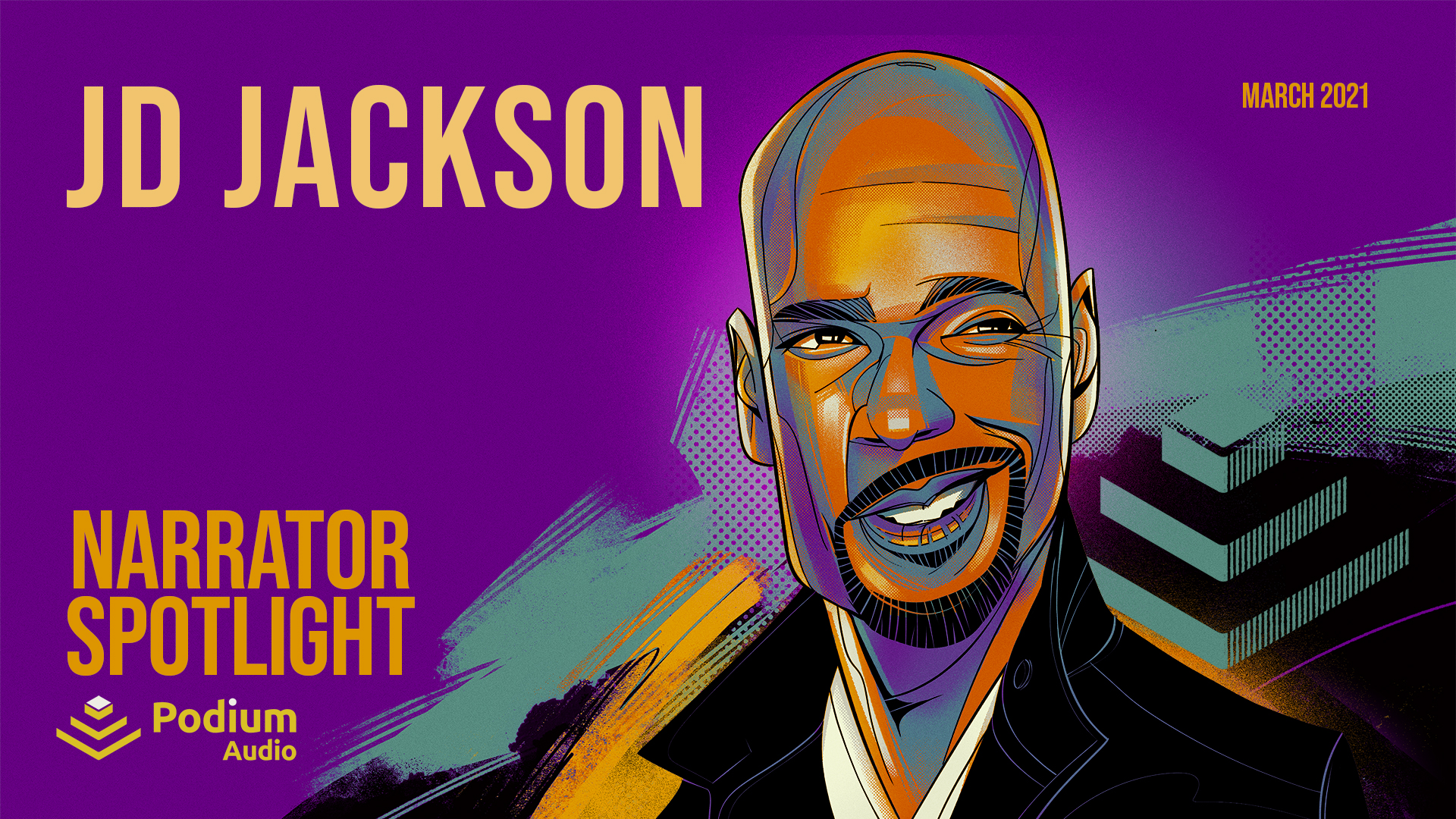 Having recorded over 150 audiobooks, JD Jackson has received numerous Earphone Awards including being featured in AudioFile Magazine’s “Best Voices of the Year” issue multiple times. He’s also been nominated several times for an Audie Award, including one for Best Male Narrator, and was also dubbed an Odyssey Award Honoree. We asked JD a few questions to get to know more about the man behind the mic. Be sure to listen to JD Jackson on his Podium Audio titles here and check out his website for more information.

What’s your favorite way to spend a day off?

Playing with my dog. Taking a soak, while listening to new music. Eating something new. Watching a movie with my family.

What type of music are you into?

What was the best vacation you ever took and why?

Jamaica.  It was the first trip out of the country, me and my wife took.

Where’s the next place on your travel bucket list and why?

The next place is Bali. We want to eat Balinese food, visit the Temples, go to Monkey Forest.

What was your favorite age growing up?

Was the last thing you read?

A Little Devil in America by Hanif Abdurraquib

What was the last TV show you binge-watched?

What’s your favorite quote from a TV show/movie/book?

“Do or do not.  There is no try” – Empire Strikes Back

What song always gets you out on the dance floor?

When you were a kid, did you eat the crusts on your sandwich or not?

Ate the top and side crust.  Threw away the bottom crust.

What activity instantly calms you?

What weird food combinations do you really enjoy?

What food have you never eaten but would really like to try?

What movie can you watch over and over without ever getting tired of?

Where do you get most of the decorations for your home?

What food is delicious but a pain to eat?

Who was your craziest / most interesting teacher

What “old person” things do you do?

What’s your cure for hiccups?

What’s the most interesting building you’ve ever seen or been in?

What mythical creature do you wish actually existed?

If someone narrated your life, who would you want to be the narrator?

Which protagonist from a book or movie would make the worst roommate?

“Bob,” from What About Bob?

What tips or tricks have you picked up from your job / jobs?

What’s some insider knowledge that only people in your line of work have?

What outdoor activity haven’t you tried, but would like to?

What songs hit you with a wave of nostalgia every time you hear them?

What was the last song you sang along to?

If you were given five million dollars to open a small museum, what kind of museum would you create?

A museum of action figures from around the world.

What languages do you wish you could speak?

What’s the most pleasant sounding accent?

What’s the funniest word in the English language?