Selected as a best book of 2021 by NPR, The Washington Post, Forbes, and Ms. Magazine, Wake is an imaginative tour-de-force that tells the powerful story of women-led slave revolts, and chronicles scholar Rebecca Hall’s efforts to uncover the truth about these women warriors who, until now, have been left out of the historical record. Originally published as part […] 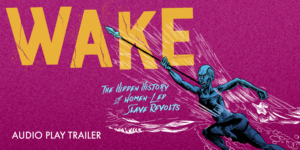 Selected as a best book of 2021 by NPR, The Washington Post, Forbes, and Ms. Magazine, Wake is an imaginative tour-de-force that tells the powerful story of women-led slave revolts, and chronicles scholar Rebecca Hall’s efforts to uncover the truth about these women warriors who, until now, have been left out of the historical record.

Originally published as part graphic novel and part memoir, Wake has now been adapted into a dramatized audio original by critically acclaimed playwright and television writer Tyler English-Beckwith and features the voice talents of DeWanda Wise (Spike Lee’s She’s Gotta Have It, Jurassic World: Dominion, The Harder They Fall), Chanté Adams, (A League of Their Own, Roxanne Roxanne, A Journal for Jordan) and an all-star full cast.

But what goes into making an audio original? In the case of WAKE, over 35 creatives came together to collaborate on the work – producers, writers, actors, designers, composers. Here is an interview two of the lead producers on WAKE – Larry Powell and Mark Holden – and how they brought their hearts, spirits and skill sets to make this piece come to life.

Larry and Mark, what were your roles in the creation of WAKE?

LARRY: Casting Director/ Associate Producer. I helped to lead the assembly of wonderful artists giving voice to the many characters that make up this incredible story. I put all of these amazing folks together with my partner Anna Lyse Erikson and Tamara Marston, Podium’s in house Head of Casting!

MARK: Creative Producer / Designer. I was initially brought on as the owner of The Invisible Studios where Wake was to be produced to usher the technical aspects from inception through delivery. My role quickly expanded into Creative Producer and Designer because of my experience producing, directing, and designing Audio Dramas. Along with Maggie Silver and the other folks at Podium, I helped bring together the core creative team including casting directors and associate producers Larry Powell and Anna Lyse Erikson, the Director; Simone Barros, and composer Jace Clayton. I was also lucky enough to get my good friend Jeff Gardner to help with foley and fx. For production and post, I worked closely with our studio’s team to design the space and emphasize the design elements that bring this beautiful story to life.

What sparked you both to this project in particular?

MARK: Within minutes of being sent Rebecca’s and Hugo’s amazing words and images, I started to imagine the design, the creative team, the process, and most importantly the space for this important piece.

LARRY: The story. The fact that there was a story about a black woman who did the near impossible to unearth the history of women-led slave revolts and then took it a step further and found a way, against all odds, to share it with the world in an exciting, visually fresh way. It is my ancestral duty to do whatever I can to help a story like this be told to the best of its ability. So, I jumped to serve, in whatever capacity.

I also really respected and was grateful to be approached by a team of non-black powerhouses who took the time to say, “you know, maybe we aren’t the best ones to find the right people to tell this story that is made up of characters across the African diaspora. Let’s find the person who is the best for this job!” And I’m happy that was me.

Larry, given the sheer number of characters spanning hundreds of years, dow did you approach the casting process?

LARRY: I have a strong foundation and history in Storytelling via Live Theatre. I classically trained at Carnegie Mellon University as an actor and writer. Theatre opens up a whole new world when it comes to actors playing multiple characters. Most times it’s because of budgetary constraints but necessity is the mother of invention and a lack of budget can birth brilliant creative choices. There have been many productions I’ve fallen in love with that have used a core group of “players” to play multiple roles.

I offered this concept, to combine roles into tracks, to our director Simone V. Barros and team, and they were excited by it and chose to move forward. We then chose to name these tracks of characters “Storyteller”, because that is what we are all doing at the end of the day, telling an important story. So, Storyteller 1, 2, 3 and so on. From there it was my job to assemble lists actors/artists who had the depth and range to play characters across the generations, societies, cultures, and regions. This was a very tedious, at times difficult process actually as one might imagine.

Because of the subject matter and the spiritual way in which I approach pulling people together, I had to really take my time and sit in silence a lot, I had to truly listen to who I felt was being called to the piece (whether i know them and their work or not)—  it’s a instinctive feeling from within mixed with signs I receive from the ancestors on the outside. Ultimately, we ended up with a cast that most dream of being able to land.

Mark, what was your approach to creating the soundscape for the piece? How does the recording technique for an audio drama differ from recording an audiobook?

MARK: For the soundscape, we approached it with a combination of accuracy, surrealism, and hyperrealism. Because the piece shifts from place to place, we needed ways to communicate to the listener that we were moving through time and space both literally and figuratively. To achieve this in the recording room, we consider room acoustics, microphone choice, blocking in the stereo space, and microphone proximity. Without getting too technical, we use some hybrid methods to record Audio Dramas that are rarely used in the states because it takes a team trained in these methods to imagine and fully realize the piece before recording and through the post process. In post, we used a combination of created foley, found FX, and lots and lots of virtual spaces.

Larry, next for you guys in the audio world?

LARRY: I’m looking forward to people hearing our recording of the play PIPELINE by Dominique Morriseau, who was recently nominated for her second TONY Award for her play “Skeleton Crew” which Philicia Rashad won her second Tony Award for. I recently directed a production of “Pipeline” for LA Theater Works — check it out.

Mark, you own one of the top sound studios in Hollywood – what project is next for you that is most exciting?

MARK: Oh! I can now mention that we will be working on Sesame Street The Musical with Sesame Workshop and Rockefeller Productions. If that’s not exciting, I’m not sure what is?!

Want even more behind the scenes info? Here is an interview with WAKE director Simone Barros.
What was your role in the creation of WAKE?
I served as the director for WAKE.
Why did you spark to this audio project in particular?
Both the subject matter and artistic scope of this audio project sparked my imagination.  Women led revolts wholly captivated me and the opportunity to join Dr. Rebecca Hall and Podium Audio giving voice, literally, to Sarah, Abigail, Lily, Amba, a woman’s who never names in court documentation and the women of an 1770 slave ship who lived and fought for a freedom that they would not live to posses, utterly compelled me. Within these histories, Rebecca interwove an intimate and candid memoir with WAKE.
The story shifts between three different time periods: early 18th century New York, late 18th century Gulf of Guinea and present-day Utah. Artistically presenting a challenge in audio that absolutely excited me with endless possibilities for creating an audio experience that spans both time and distance. Overlapping and morphing sounds from the past into sounds of the present and researching instruments that survived the Middle Passage resounding on the African and American continents to devise a transient soundscape absolutely exhilarated my directorial senses.
There’s such a power and visceral quality to sound. Listening to the person’s voice brings that person into our space as though they are present with us in the same room. I directed this audio project to invoke the presence of the women who led the three historical revolts so that the time the audience spent listening to this audio drama, was time they spent in the presence of these resilient and powerful women.
Inspired by Ntozake Shange, Marlon Riggs and oral tradition, the women voices envelope the listener in a haunting and stirring choreopoem. I’d set out to create an audio drama to be played the way we play our favorite playlist or album – on repeat.
What was the most rewarding part of the process of directing this work?
The most rewarding part of the process of directing WAKE was meeting such a persistent and heartfelt group of artists. I stand in awe of Jace’s musical mind, talents and inventiveness! DeWanda’s smile lights up a room. She walked into the studio on day one to perform one of the most emotional scenes in the play and beautifully balanced the subtlety of such sincere and raw emotions. DeWanda deeply rooted her performance in the emotional life of her character. Chanté gives such a tender performance; she so honestly conveys the psychological health and fortitude that grows from learning the history of the strong women who fought and revolted for their freedom. The entire ensemble (John Stewart, Román Zaragoza, Bahni Turpin, Fọlákẹ́ Olowofoyeku, Jerri Johnson, Karen Malina White, Alex Ubokudom, Tim Dekay, Blake Cooper Griffin, Andre Sogliuzzo, Matthew Wolf, Katherine McNamara, Kate Steel and Rhian Rees*) all brought their talents and dedication to our project and getting to create a gripping and relevant drama with them, coming to know each and every of one them has such an wonderful experience. To have Erin Washington’s intelligence and talent as our dialect coach ensured an authenticity to the work that was invaluable. I’ve been thrilled to collaborate with the swift and nimble editor Charles Carroll and producers Maggie Smith, Mark Holden, Larry Powell, Anna Lyse Erickson. It’s been my honor to have meet Dr. Rebecca Hall and witness her resilience and courage.
What’s next for you in the audio world?
In addition to directing the audiobook of Kate Folk’s Out There Stories and directing Dion Graham for Michael K. William’s memoir Scenes from My Life, I’m excited about a sound art installation and audio docu-drama on Cabo Verde my grandfather’s home country debuting next spring.
Share