You can now create your own character and become fully immersed in the Ascend Online world with this micro RPG game designed by Twogether Studios.

In the microgame, players will create a party of adventurers and journey into the world of Ascend Online. Players will work to build a home and help it prosper, trying to complete their main quest while facing many challenges along the way. A collaborative storytelling game, players craft the adventure along the way.

“It’s surreal to know that readers can actually enter the Ascend Online world in their own way with their friends,” said author Luke Chmilenko. “They will create the story themselves with their friends as they identify their main quest. If you need to banish an undead menace, is it a zombie plague or the ghost of an ancient tyrant? If you need to resolve a noble feud, who are these nobles and what are they fighting over? The options are as endless as your imagination.” 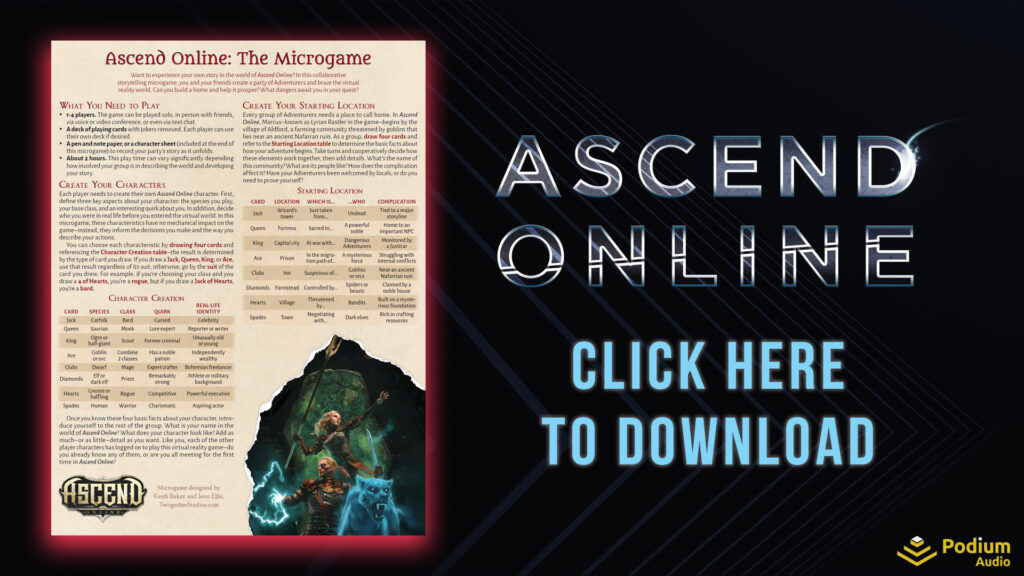 In the Ascend Online series, Marcus and his friends enter a revolutionary new video game. Realizing that this game is nothing like he’s ever played before, Marcus is swept up into a whirlwind of adventure as he struggles to defend his new home, quickly finding that marauding goblins are the least of his problems. Ascend Online has sold more than 125,000 units generating nearly $2M in digital sales across audio and ebook.

Glory to the Brave, the fourth installment of the series, follows Lyrian and his friends are once again thrust into a fight for their very survival, this time against Carver and his band of murderous adventurers. But as their newfound war quickly reaches a stalemate, both sides find themselves scrambling for a way to break it, while viciously battling one another for every inch of ground that they can steal in the process. Just as Lyrian and the others manage to gain an advantage that could very well end the conflict, they find their world turned upside down as an even greater enemy appears on the horizon. Pushed to the brink, it will take every ounce of cunning and courage they have to find a way to survive.

Twogether Studios is the design studio of award-winning game designer Keith Baker and product designer Jenn Ellis. Keith is best known for creating the world of Eberron for Dungeons & Dragons. Together they have created a number of games including the upcoming The Adventure Zone: Bureau of Balance game, Illimat and the RPG Phoenix Dawn Command. 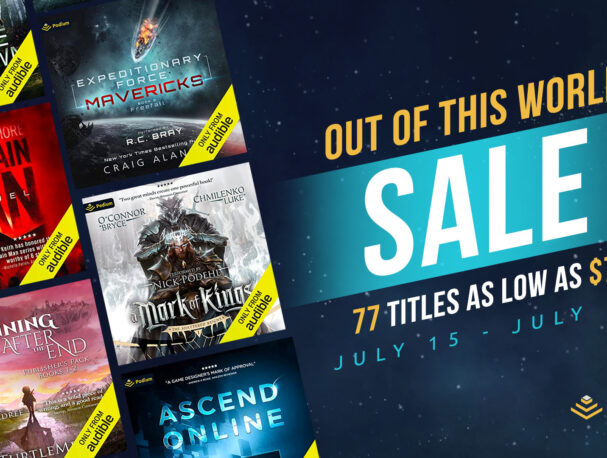 77 Podium Titles for as little as $7 on Audible!

A total of 77 Podium titles are now on sale all for just $7 or less on Audible 😱 The Out of this World sale starts now and ends July 18th. Check out the list below and start adding to that library! [...]

The Torch that Ignites the Stars Review on AudioFile!

Joining us for July’s Narrator Spotlight is Mark Boyett, a fantastic and absolutely prolific narrator, narrating over 250 titles in every genre you can think of. Get to know Mark in this audio Q&A from our Narrator Spotlight series. [...]

“A Blood of Kings” on Mary Robinette Kowal’s Blog

Bryce O'Connor joins Alyshondra Meacham to talk about A Blood of Kings, the second novel in the Shattered Reigns series written with Luke Chmilenko. The audiobook released Tuesday, 7/14, and is performed by voice artist Nick Podehl. [...]