We are happy to announce the addition of five of the most sought-after voice actors to our groundbreaking partnership, AudioCollab. AudioCollab aims to support and elevate the impact of the top performers in the audiobook industry by providing these in-demand performers with multi-year, guaranteed individual contracts in addition to resources to develop each voice artists’ social […] 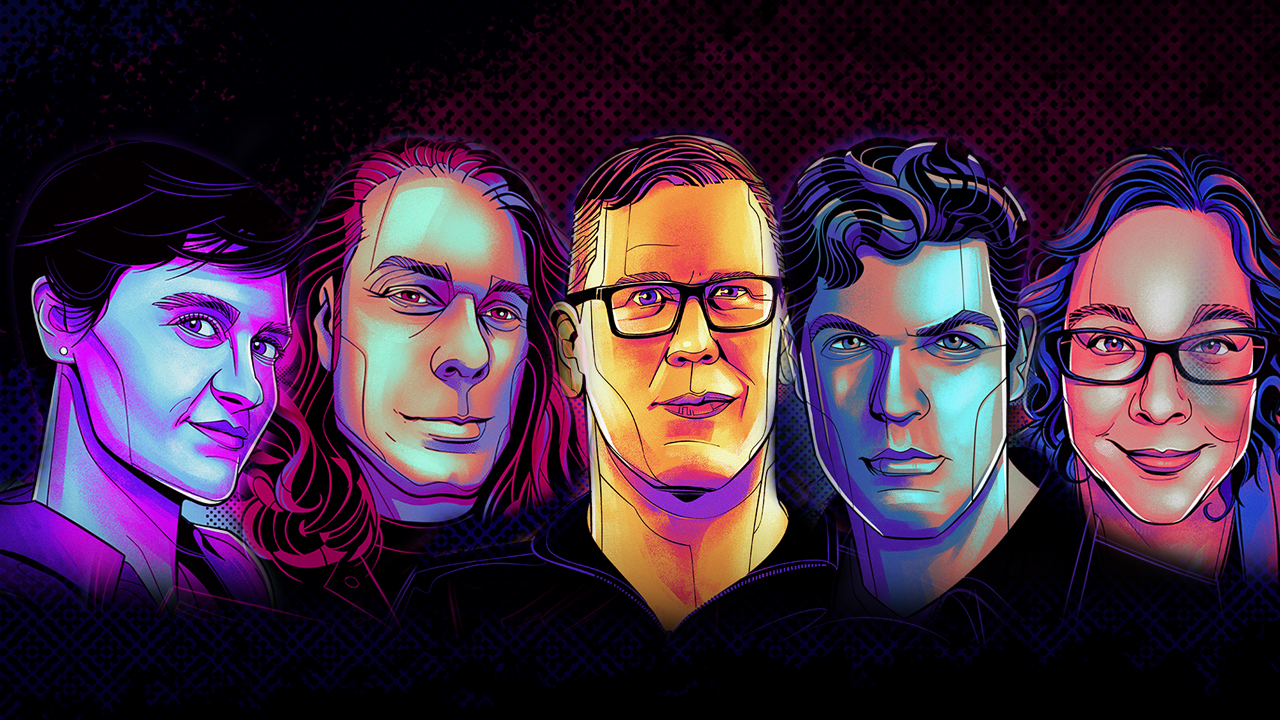 Meet Rebecca Woods: Rebecca is a working actress and artist with a combined 15 years of education and professional experience. She’s passionate about the storytelling process, and in any medium her focus is to truly create an immersive and holistic experience. To her, every moment—every detail—is an opportunity to bring an entire world into existence. For the past two years, Rebecca has brought this perspective to the voice-over industry, solo- and co-narrating over 80 audiobooks as well as lending her voice to AI platforms, podcasts, PSAs, and video games. Personally, we’d listen to anything Rebecca says!

Meet Aaron Shedlock: Aaron is an award-winning audiobook narrator who has worked extensively in the audiobook industry for several major publishers. Credited with over 250 titles in several genres, he has proven himself to be a versatile performer with a large fan following. Aaron prides himself as someone who’s “funny, quirky, passionate and a huge nerd.” He also notes, “Above all, I care. I’m humble. I’m considerate. I love with all of my heart and I want to make the world a better place with my chosen forms of art. Even if that just means making someone smile every now and again.” And we’re all smiling back at you, Aaron! 🙂

Meet Eric Michael Summerer: You can hear Eric’s distinctive, friendly, and energetic sound in hundreds of projects, including audiobooks, corporate and instructional narration, commercials, educational animation, and even a few electronic games. A graduate of Syracuse University who studied both TV/radio/film and theater, Eric has served as narrator for over 300 audiobooks. He is an Audie Award finalist and a two-time AudioFile Earphones Award winner. Eric also serves as co-host for the top-rated board-gaming podcast The Dice Tower. In his spare time, Eric loves playing designer board games and attempting the sport of curling. Wouldn’t you love to see that in person!?

Meet Daniel Wisniewski: Daniel is an actor of both voice and stage based out of New York City. He has produced over 100 audiobooks, was awarded the 2020 MLC Award for Best Narrator for his work on Shane Boulware’s Soulstealer, and hit the Audible Best Sellers List for his work on Dave Willmarth’s Battleborne and James Haddock’s Wizard’s Alley. He is also an accomplished stage actor, with recent credits including The Imbible: Day Drinking (Off-Broadway), Men with Money (World Premiere) at the Aurora Theatre in Georgia, and Gerard Presgurvic’s musical adaptation of Gone with the Wind (First China Tour, English Premiere). When not working, he can be found either watching Great British Bake Off with his fiancee or galavanting with friends as an alcoholic hobgoblin bounty hunter in their latest Dungeons and Dragons campaign. We can only imagine being a fly on the wall for that!

Meet Hollie Jackson: With over 650 titles and counting, multiple award-winning narrator Hollie Jackson has worked with authors around the world. She’s proficient in a variety of accents, is a member of SAG/AFTRA, has won various independent awards, including the IAA for Horror 2019, and is constantly working to expand her repertoire across the spectrum of incredible works available. Hollie always strives to bring a wide range of characters to vibrant, compelling life, allowing for total immersion in the story. She wants you to feel the real world melt away as you engage with her work. Aren’t you ready for a little mental vacay? We know we are!