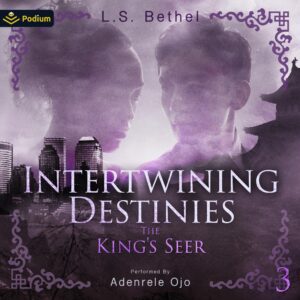 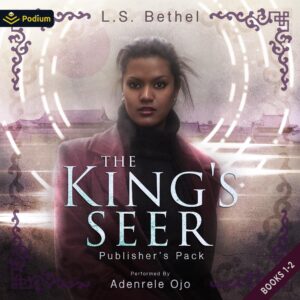 An indie author from Atlanta, L. S. Bethel loves to write fantasy, scifi, and speculative fiction. She has been writing since she was 10 years old, taking after her late father. It is because of her faith, family and friends that she is able to push herself to continue to create. She's read hundreds of books in her life, but found very few characters that looked like her. Now she takes the opportunity to give other women like her the chance to see themselves in the pages of a book.

**Adenrele Ojo **is a multi-AUDIE Award winner, has received several Earphone Awards and was one of Audiofile’s Best Voices of the Year 2015. She is a wearer of many creative hats: actress, audiobook narrator, producer and photographer.  Adenrele is a professional actor and has performed in such plays as: August Wilson’s **_Jitney _**and **_Joe Turner’s Come and Gone _**(nominated for an **L.A. Stage Alliance Ovation Award for Featured Actress**)**_ _**and **_The Ballad of Emmett Till_** (winner of the **2010 L.A. Stage Alliance Ovation Award & the Los Angeles Drama Critics Award for Best Ensemble) **both at The Fountain Theatre. Some of her film credits include **_Family_**, **_ELEVATE_ **and** **Lifetime’s **_Within_**; and her very own, **_Bathroom Vanities_**, a don’t-judge-a-book-by-it’s-cover comedy about one woman’s unforgettable experience in a ladies’ bathroom, which she starred, co-wrote and produced.  Ojo's many audiobooks include:** Stacey Abrams’s, **While Justice Sleeps**, **The Premonition** by Michael Lewis, **The Queen: Aretha Franklin** by Mikal Gilmore,** The Butterfly Effect: How Kendrick Lamar Ignited the Soul of Black America **by Marcus J. Moore, **In Search of the Color Purple: The Story of Alice Walker’s Masterpiece** by Salamishah Tillet, **The Love Songs of W.E.B. DuBois (An Oprah’s Book Club Novel) **by Honorée Fanonne Jeffers, **Billions and Billions **by Carl Sagan, **Black Futures** by Kimberly Drew & Jenna Wortham **and the multi-cast titles, Four Hundred Souls **edited by Ibram X. Kendi and Keisha N. Blain **and The 1619 Project: A New Origin Story **by Nikole Hannah-Jones**. ** **When she is not recording, you can sometimes find her directing authors, celebrity actors and other audiobook narrators.